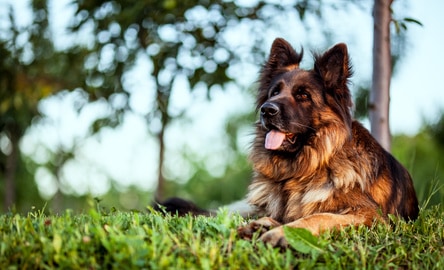 Unlike a lot of breeds, GSDs can come in different German shepherd coats, with literally dozens of colors and several standard coat lengths. This is because of their long, storied history and the various roles that Shepherds were bred for in the past. However, despite the sheer variety in coat availability, some colors aren’t accepted as being a part of the breed, mostly if they’re caused by genetic mutations.

To a lot of owners, the coat color of their dog is only important because of aesthetic reasons. However, if you’re a member of a kennel club or other dog breed organizations, it’s important to know which colors are recognized as registered colors for the breed and which are not. So, when looking to select a German Shepherd, knowing the different German Shepherd coats and whether they’re considered an actual part of the breed is considered important.

As a breed with a lot of variety, there are several coat types that are accepted as standard amongst breeders. The most common colors for a German Shepherd are:

Tan: A tan coat is the most common and accepted coloring for a German Shepherd. It’s the coloring that anyone thinking of the breed is most likely to imagine.

Two color coats come in a huge variety, but Black and another color are generally the most accepted. Black and tan are usual, as is black and red and black and silver.

There are also several regular colors you might see a German Shepherd that are not accepted as standard colors for the breed. These include:

Finally, you might also see Panda or Piebald Shepherds. While they might look like a crossbreed, dogs of this type are caused by a recessive gene mutation. While some kennel clubs permit this variety under the aegis of ‘Panda Shepherds,’ some may not.

In addition to the various colors, German Shepherd coats can come in three different lengths. Unironically, these lengths are short, standard, and long. In the west, the short and standard length coats are usual, with longer coats seen in areas with more inclement, colder weather. German Shepherd coats also tend to have thicker, denser fur than a lot of breeds, with a definite undercoat. Some dogs of this breed also have a short mane of fur around their ears, on their chest, or on their back legs and tail.

When you look at a German Shepherd’s coat, one of the things that you should pay attention to is their mask, or the pigmentation on their face and muzzle.

However, if both parents carry the same recessive gene, it is possible for their pups to be born without masks, and have no pigmentation on their muzzles, meaning no traditional black face marking that people expect.

It is also possible for this to manifest as ‘reverse masking,’ where the dog has additional marks along its nose and under their cheeks which make them appear incredibly wolf-like.

Maskless and reverse masked shepherds, being anomalous coatings, aren’t recognized as standard colors by any club. Hopefully, now you understand the different German Shepherd coats, and the sheer variety of colors and coat types that are accepted. No matter which coat your shepherd has, you’ve made the right choice in a breed. Intelligent, courageous and devoted to their owners, German Shepherds are one of the most well regarded and recognizable breeds for a reason.