Cats are playful and mysterious creatures. And very often they’re just hilarious. They are so hilarious and hypnotizing that you can’t stop watching them. If you don’t believe me just check out the internet. We find many animals cute and funny, but there’s only one species that dominates the web. It’s the cat.

While some funny dogs, pandas, monkeys or other animals can briefly steel a spotlight, it won’t take too long before the real owners of the internet fame would claim back their throne. Watching cat videos and reading cat jokes is as funny as it gets, but whenever something is funny we try to make it even more fun. Therefore, we have plenty of cat jokes to make us laugh when our furry companions aren’t around.

We have collected and selected some of the best cat jokes circling around. So, let’s get started!

What is a cat’s favorite color?
– Purr-ple.

Why cats like computers?
– Usually, they come with a mouse.

Why are cats good at video games?
– They have nine lives, even before they start.

Why do cats always get what they want?
– Because they are purr-suasive.

Cats are never confused.
– They are purr-plexed sometimes, though.

What is a cat’s favorite school subject?
– Hiss-tory, of course.

How cats greet each other?
– Have a mice day!

What’s the difference between a cat and a comma?
– One has paws at the end of its claws, and the other is a pause at the end of a clause.

What do cats say when they get hurt?
– Me-Ow!

What’s another name for the cat’s house?
– A scratch pad!

How do you call a cat that lives in the Far North?
– An Eski-mew.

Why does a cat take piano lessons?
– She wants to become a mew-sician. 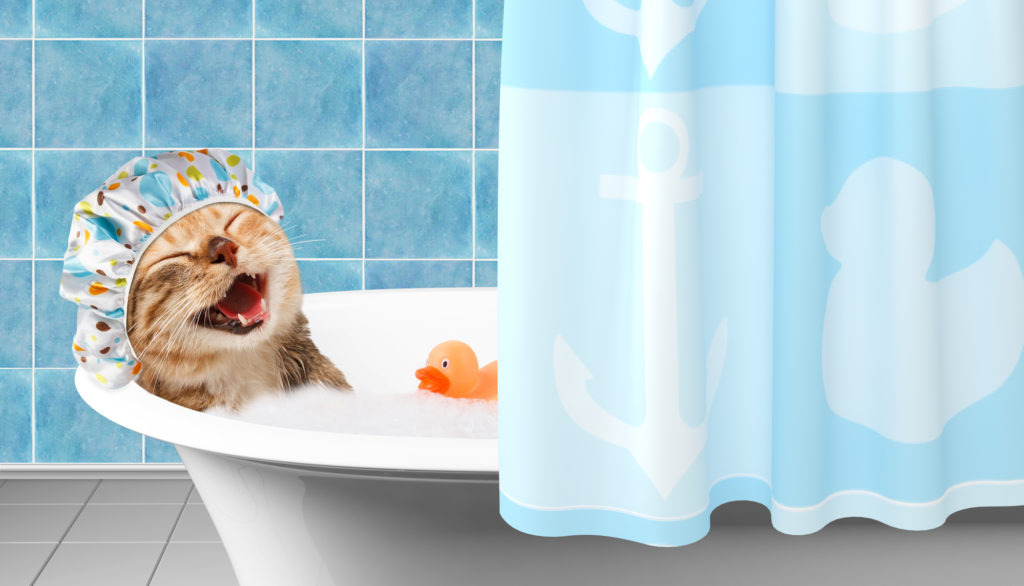 Cat’s Favorite and Not so Favorite Things

What’s the cat’s favorite game to play with a mouse?
– Catch!

Why cats avoid playing poker in the jungle?
– There are too many cheetahs!

What’s a cat’s favorite way of shopping?
– A cat-alog.

Where cat write down notes?
– On a scratch paper!

How do you call the cat police?
– Claw enforcement.

And whom do they chase?
– Purr-petrators!

A Couple of Jokes

Two girls went out to grab a coffee and catch up. “ I’ve heard you got married,” the first one said. “Yes, I married a really nice guy but he was allergic to cats. It was awful! As soon as he came anywhere near my cat he would get a terrible rash. It was impossible for them to live together.” the other girl replied. “So, what did you do?” “I had no choice – I had to divorce!”

A man enters a library and asks for a book about Pavlov’s dog and Schrodinger’s cat. The librarian says, “ It rings a bell, but I am not sure whether it’s there or not!”

A woman goes to the movie theater and notices a cat sitting next to her. “You are a cat, aren’t you?” the woman asked. “Yes, I am.” the cat replied. “What are you doing here? Why are you watching the movie?” the astonished women continued. “I liked the book.” the cat replied.

An art collector was walking down the street when he noticed a cat lapping milk from a saucer in front of a local shelter. Immediately, he recognized that the saucer was very old and valuable. He casually entered the shelter and offered to adopt the cat for $20.

“That cat is not for sale.” the manager replied. The collector said, “Please, I really need a cat to catch mice around my house. I saw this cat chasing a mouse, so I’ll give you $100 for her.” “Okay.” the manager agreed and handed over the cat. The collector continued, “Hey, I’ll give you another $5 if you could throw in that old saucer. The cat’s obviously used to it, so she’ll adapt quicker to a new home.” The manager said: “I am sorry man, but that’s my lucky saucer. The sales increased tenfold since I have started using it!”

Two cats are sitting in front of the bird shop and observing newly arrived green canary. The first cat said, “It’s not a canary, he’s green.” The second cat said, “I don’t know, maybe he’s not ripe yet!”