Dachshund vs. Pug: Finding the Best Dog for You

There are already over a hundred purebred dogs. And then there are the various hybrid mixes that exist now. With so much choice, how are we able to decide which breed will be the best pet to have?

Some people already have a few choices in mind. But if you’re still torn between several breeds, you likely have some standards. Basing your choice on a dog’s temperament to their grooming needs is normal.

Because of that, we’re comparing two small dogs in this article. For those who are curious, here’s a dachshund vs. pug comparison.

The first thing we often look at dogs is their appearance. Whether we like it or not, we tend to gravitate towards what we find adorable. For some people, it’s the dachshund. But for some, it’s the pug.

The more adorable and the cuter of the two is purely subjective. But both have very distinct looks and features. You’ll know a dachshund or a pug when you see one.

Obesity is a common problem for any dog breed. They may easily gain weight without enough exercise and with overfeeding. That’s why you should always track your dog’s feeding plan and activities.

Dachshund dogs are around eight to nine inches. But miniature dachshund stands at five to six inches only. Their ideal weights are also different. Standard dachshund should weigh 16 to 32 pounds. Miniature types should be 11 pounds.

On the other hand, both male and female pugs stand at around 10 to 13 inches. Their ideal weight should be between 14 and 18 pounds only.

Dubbed as the wiener dog, the dachshund is best known for its long and low body. They were bred this way to make it easier for them to dig through badger dens. But even when their main job now is to accompany people, it is still a breed standard to have this body type.

Dachshund dogs also have long snouts. Their ears are close to the head and have a moderate length. These dogs also have strong and muscular necks and stumpy legs.

On the other hand, pugs have a distinctive face. They are best known for their flat and wrinkly faces and comical expressions. Their build should be cobby and square according to breed standards.

Pugs either have “rose” or “button” ears. But the majority prefers the latter.

Another distinct feature pugs have are their curly tails. It should be curled tightly and closely to the body. Double curls are seen as perfection. 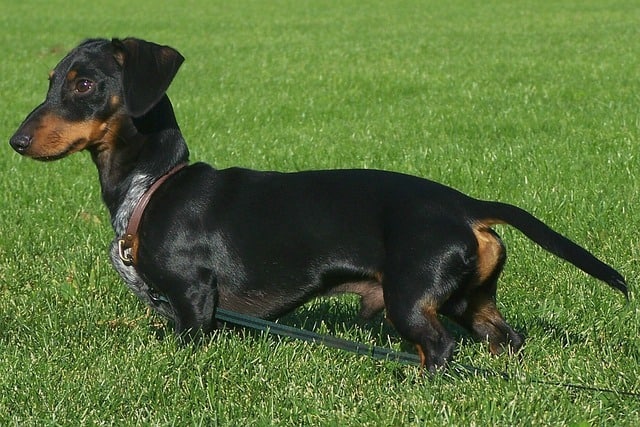 Each dog has its own personality and attitude. Knowing their temperament lets you know whether they’re the best choice for your family.

Dachshund dogs are great for first-time dog owners. These dogs have an average intelligence which makes them trainable. But they are a little stubborn which can make training a bit challenging.

They are also friendly, but they are likely to bark at strangers.

If you have small kids, dachshunds can also fit well in the family. They’re good with both the adult and young members of the family. In fact, they’re so close to the kids that they’ll do anything to protect your children.

That said, dachshunds are more aggressive compared to pugs. It might be a little tough to get them to like new people right away. These dogs will tolerate other dogs and animals but aren’t as friendly as pugs are.

Additionally, these dogs are loyal and devoted to their family. They love attention and can get jealous. Train them to be more social to avoid any sort of unnecessary aggression in the future.

Separation anxiety is also common in a dachshund. You’ll want to train them to be more independent as well.

Pugs are small, but they are charming and have big personalities. If anything, these dogs are comedians and love making their families laugh. They enjoy the attention and will continue with their crazy antics to gain any reaction.

These dogs also have an amazing expression. They’re comical and mischievous. If you have a pug, you’ll end up getting a good laugh every day. It can definitely take your stress away.

Speaking of stress, these dogs enjoy cuddling and snuggling with you. It’s a good thing since doing so can help you relax and stay calm.

Pugs are incredibly friendly. They’re good with other dogs, animals, and children. They even tolerate strangers who pass by. While not the best watchdog, pugs can bark and alarm you of any threats.

In fact, they’re also likely to do anything to protect you.

But while pugs are great in general, these dogs work best with experienced owners. They’re incredibly stubborn which makes them harder to train.

If you’re looking for a long-term pet, the dachshund vs. pug battle is a tie. Both are able to live longer. Dachshund can live from 12 to 16 years while pugs have a life expectancy of 13 to 15 years.