Have you ever heard of a bull-boxer or a Valley bulldog? These two are names for the English bulldog boxer mix or the boxer–bulldog mix. 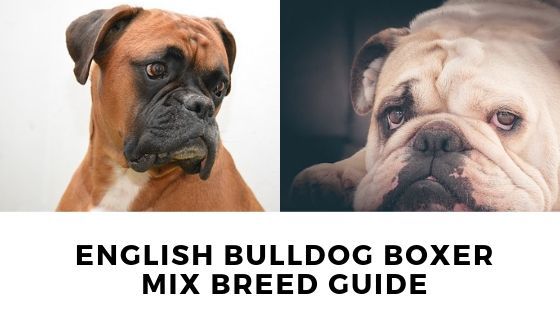 No matter what you choose to call him, you won’t be able to resist this intelligent, calm-natured, and adorable pooch.

This mix is a small- to medium-sized breed that typically reaches from 12 to 25 inches in height when full-grown. These dogs have the strong, muscular build of their parent breeds and usually weigh between 50 and 125 pounds.

Bull-boxers look either like a shorter-than-usual boxer or a taller-than-usual English bulldog. They typically get the boxer’s thick neck, broad shoulders, and big feet. The facial features usually resemble those of the English bulldog: pronounced head, pushed-in snout, round eyes, and floppy ears.

Some valley bulldogs inherit the prominent skinfolds and underbite of the English bulldog. Their coat is usually soft, sleek, and short. They come in various colors, including tan, red, white, black, and fawn.

The Valley bulldog is thought to have originated in the Annapolis Valley in Nova Scotia, Canada, hence the name. The crossbreed is still popular in the area.

They are a highly intelligent crossbreed, which makes it easy to train. However, because the English bulldog has a bit of a stubborn streak, firm but gentle handling is needed. Bull-boxers respond best to positive, rewards-based training.

Sweet, even-tempered, and playful, the English bulldog x boxer is a delight to have around the house. They can be calm and docile one moment and spirited the next. They love clowning around with their caregivers and will even tolerate the attention of children.

Like boxers, Valley bulldogs are alert and inherently suspicious of strangers. But if they are socialized properly, they do get along well with unfamiliar people, other dogs, and other household pets. These doggos require a dominant owner who will give them rules to follow and keep them in line.

Obesity is a common problem, as are hip and elbow dysplasia, skin allergies, inflammatory bowel disease, and corneal disease. Because of the shape of the Bull-boxer’s snout, it may experience breathing issues and sometimes snore. The typical lifespan is 10 to 12 years.

The Valley bulldog’s coat is soft, short, and smooth. It does not require constant grooming or bathing, unless the pooch gets really dirty.

While daily baths are not needed, you need to make sure that the dog’s skinfolds on the face, belly, tail, and genital area are always clean and dry. If these areas are constantly moist, the bull-boxer can develop an infection or an allergic reaction. Wipe down the dog’s skinfolds with a soft cloth after every bath and after walks in the rain.

A bull-boxer pup can cost anywhere from $500 to $2000. If you’re looking to acquire a Valley bulldog pup, make sure you get one from a reputable breeder who has carefully screened the puppies for health conditions.

The English bulldog boxer mix has the potential to be the best canine companion for your family. Before you get one, do your research to ensure that you and your future pup will be happy together.