Is Beef Jerky Good for Dogs?

As dog lovers, we only want the best for our dogs. However, despite our best intentions, we sometimes end up feeding them stuff that is actually detrimental to their health instead of being beneficial.

It’s only natural that we want to be more meticulous with what to feed our dogs, whether it’s a snack or a full meal. In this case, we’d really want to know: “Is beef jerky good for dogs?”

The Process of Making Beef Jerky

First, let us look at how beef jerky is manufactured. This will help us understand about this tasty treat that both dogs and humans actually love.

According to Jerky-specific website, Jerky.com, jerky is actually a piece of meat that has been dehydrated and sprinkled liberally with salt to induce the taste.

Think of jerky simply as cured meat or smoked meat. The method of preparation is based on an age-old practice of merely hanging meat out to dry in the sun before it is stored. The whole purpose is to remove the entirety of moisture in a piece of meat.

We all know that moisture can lead to all sorts of problems that can make meat inedible. Bacteria thrive in humidity, and the moist chicken becomes spoiled rather quickly.

With moisture removed out of the equation, however, bacterial development is effectively hindered, if not eliminated. This has the advantage of allowing the meat to be stored for an extended period of time compared to other types of meat.

For starters, the main ingredient of beef jerky is fresh and lean ground meat. However, there are also types of jerky that make use of chicken meat – known, of course, as chicken meat jerky.

Nutritional Value of Beef and Other Meat Jerky 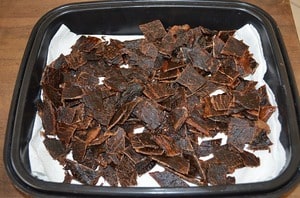 Delicious beef jerky. Do they benefit dogs as well as humans?

When we choose food for our children, the first thing we should look at is the nutritional value. Do our little ones benefit from the nutrients provided by the ingredients used to make the food?

You should also be asking the same reason when choosing beef jerky treats for your dog. According to the Australian website Healthy Dog Treats, beef jerky made from beef liver have a lot of nutritional value that can benefit your dog.

The website explains that jerky made from pure beef liver slightly exceeds the minimum amino acid levels required for any dog treat to be beneficial for dogs.

That means only one thing – dogs and beef jerky do have a positive relationship with one another. That makes beef jerky one of the best natural meat treats you can give to your dog.

Perhaps the only reason why you should avoid feeding your dog beef jerky treats is when you’ve been predominantly feeding it beef meat without any other alternative. This can cause allergic reactions in your dog.

Several experts have pointed out the differences between “human jerky” and “dog jerky,” regardless of what kind of meat the food is made from.

It can be quite deceiving. After all, both are made from dried meat. They also look the same. That’s why some dog owners make the mistake of feeding meat jerky formulated for human consumption to their household pets.

For instance, Dog Treat House points out that sodium tolerance levels for dogs are considerably lower than that of humans. Our bodies are designed to take more than 600 milligrams of sodium, but those levels are considered dangerous for a dog.

That’s because a dog can only tolerate a maximum of 100 milligrams of sodium in their daily diet.

In addition, the American Kennel Club warns that beef jerky for dogs contain onion. While for us humans it’s merely for taste, onion is another kind of poison for your dog. 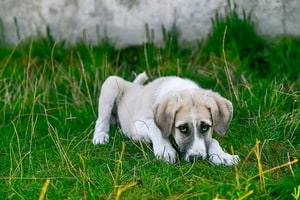 Sodium and onions in human jerky can make dogs sick or, worse, kill them.

According to the AKC, onion contains N-propyl disulfide. This compound attacks red blood cells in dogs. This can lead to hemolytic anemia, a condition in which the dog’s bloodstream experiences a deficiency in the amount of oxygen it supplies to the entire body.

What happens when you feed your dog jerky for humans? According to the US Food & Drug Administration, reports of jerky-related poisoning indicate that dogs can suffer gastrointestinal problems and complications in their kidneys and urinary systems.

Furthermore, in 10% of the cases they investigated, the dogs suffered skin irritation and convulsions, among others.

Making Your Own Beef Jerky 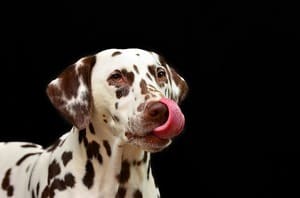 Anyone can actually make their own jerky for their dogs. This way, they can ensure that the meat is free of chemical preservatives, as well as spices that can harm your dog, and contains only 100% natural meat.

All that you need is fresh ground beef – if you want to create beef jerky — or any kind of lean meat, with as less fat as possible.

The thickness of the meat will dictate how long you will need to dry it using any commercially available dehydrator, while fats can shorten the shelf life of your jerky.

Another concern is sanitizing the meat, so it is free of harmful bacteria like Salmonella and E. Coli. Drying the meat out only reduces the number of bacteria present, so heating it in temperature sufficient enough to kill pathogens and prevent their multiplication.

To do that, the University of Oregon says, you will need to subject dried meat to an environment having 257 degrees Fahrenheit, or 126 degrees Celsius.

This is where an oven comes in. After drying the meat out, a blog by the Bishopton Dog Walking Services suggests heating the jerky in a pre-heated oven for 10 minutes at 150 degrees Celsius.

A word of warning – Never use salt or vinegar to deal with pathogens as we do with our food. They can cause upset stomach in your canines, just like food with onions and other spices could.

So, if someone asks you, “Is beef jerky good for dogs?” Don’t hesitate to say “Yes, but you should feed them jerky made for dogs and not for humans.”