Rottweiler German Shepherd mix dogs are perhaps one of the best home companions and protectors. Commonly referred to as the Shepweiler, Shottie, Rottweiler Shepherd, or the Rottie Shepherd, these dogs are smart and brave. So, are these dogs the best pet for your family?

Before you get a Shepweiler, here’s everything you need to know about this designer dog. 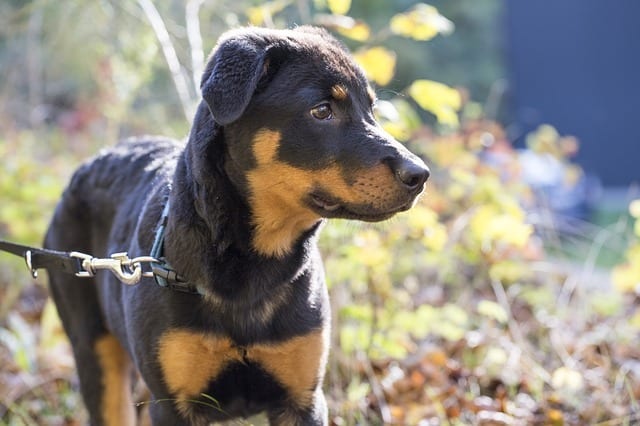 The German Shepherd and the Rottweiler have very distinct features.

For their physique, German Shepherd and Rottweiler dogs are similar in height. But, Rotties are often heavier due to their muscle mass.

But together, what does a German Shepherd Rottweiler mix dog look like?

Shepweiler dogs are also medium-sized dogs just like its parents. They stand at around 22 to 27 inches and can weigh from 70 to 80 pounds.

This is the average size and weight considering that both parents are around the same height at 24 inches. German Shepherd breeds often weigh at around 70 pounds max while Rottie dogs are from 70 to 80 pounds because of their muscle mass.

When it comes to fur and coat, Shepweiler dogs often have the thick medium length-hair that they acquire from the German Shepherd side of the ancestry. These designer dogs also usually acquire the Shepherd’s thick neck coat.

Colors vary from brown, black, fawn, tan, and sometimes even gray. They could either have the mixture of black and fawn similar to the German Shepherd or the black and tan of a Rottie. 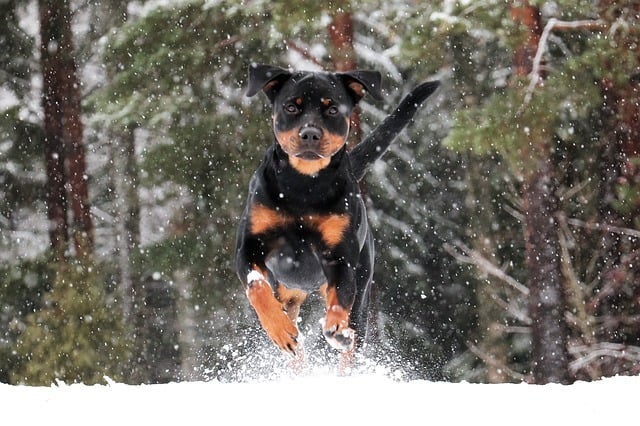 Just like most designer dogs today, the history of Rottweiler German Shepherd mix dogs is somewhat fuzzy. There are no definitive dates when they appeared and were first bred. With that being said, the Shepweiler’s parents rather have a long history.

Back in the days, the Roman Empire had Asian Mastiff-like dogs in their breeding stock, becoming the foundation of lots of German dog breeds which included the Rottweiler. When the empire fell these dogs found a new home in Rottweil.

There, they would become herding dogs, protecting the herd against rustlers and bandits around the area. Apart from that, they would also pull meat carts in the market due to their strength.

Because of their work, they earned the name “Butcher’s Dog of Rottweil.” By 1800s, they lost their job as herd protectors due to the creation of railways.

Still, they became K9 dogs and security dogs who protected their owners. As they have been protecting herd for a long time, they became such good protectors.

Today, Rottweiler dogs remain to be among the top breeds who were used as K9 dogs, search and rescue dogs, guard dogs, and even service dogs who guided the blind and helped people with special needs.

Compared to the Rottweiler, the German Shepherd is a new breed. As the name suggests, this breed also originated from Germany and was originally bred by a German officer named Captain Max von Stephanitz. He aimed to breed one of the best herding dogs.

Indeed, the breed was among the most favored herding dogs by farmers and cattle owners in the region. They would herd the livestock to their places or would herd them towards the market.

In 19th century USA, they would be brought to the country where they would be acknowledged by the American Kennel Club and would become one of the favorite dog breeds of any pet lover.

Today, German Shepherd dogs are also trained to be in the police, military, search and rescue, guard dogs or even service dogs.

The Shepweiler came from two highly intelligent and trainable dogs, so it’s not surprising that a German Shepherd Rottie mix dog is as smart as they are. Because of that, they can be easily trained as they can learn commands quickly. They can even be trained for special commands which makes it possible for them to become working dogs.

It is essential that you train them early on. Obedience training ensures they have good behavior especially in front of other people and animals. If you leave them be, they’d grow aggressively protective of their families and won’t let anyone near them, even friends and neighbors.

They also have this tendency to act like the Alpha so they won’t be following your rules. This may even come to light when you are training them so don’t be afraid to show authority and be firm.

Your Rottweiler German Shepherd mix breed may also feel bored when left alone. This could lead to several problems such as barking excessively or breaking things at home. Besides obedience training, you should start giving them crate training especially when you have to leave the house for a longer period.

Exercising is part of their daily training that keeps their body healthy as well as their mind.

Your Shepweiler will be an extremely active dog, so if you live in an apartment and you aren’t the type to go out often, maybe this hybrid mix isn’t for you. They work best with families and parents who have an active lifestyle like them.

Daily exercise is needed for these dogs. You can bring them along for a jog or a run as their energy levels might not call for a simple walk. It’s also wise to bring them to the park so they can play with other dogs and have a wider space to run around. This is why obedience training is necessary.

Just like with any other designer dogs, you can’t guarantee what your Shepweiler pup’s temperament is. Some have a personality closest to one side of the family tree and vice versa. Meanwhile, there are also dogs that have the exact mix of both dog breeds.

Both the Rottweiler and the German Shepherd breeds are known as aggressive dogs. Rottweiler pups, especially, are stereotyped as a dangerous breed which leaves a bad mark for wannabe parents.

Nevertheless, their aggressiveness is misunderstood. They are known as guard dogs, and it is in their DNA to always be on the lookout for danger. Whenever they sense something off, their primal instinct would kick in to save their family.

Your German Shepherd Rottweiler mix puppy might acquire this protectiveness. That’s why training them while they are still young is necessary to avoid untoward incidents in the future.

Due to their size and their energy levels, your dog will likely want food now and then. Still, you should never free feed them as any dog has a chance of getting obese when left with food. Always monitor them while they eat and follow a feeding plan.

Getting the help of your vet is your best chance at making the best feeding plan for your pup. But you can also observe them and come up with your schedule of feeding.

Usually, your dog will eat three to four cups of dog food every day. Split this into two or three equal servings throughout the day. Never forget to give them water and that they should always have access to a source, especially if you’re away.

When it comes to choosing their food, it’s best that you find a protein-packed dog food. The animal source should be number one on the ingredients list. Apart from protein, essential fatty acids such as omega-3 fatty acid, antioxidants, vitamins, and minerals should be a part of their diet.

Designer breeds are deemed healthier than purebred dogs. Still, they are at risk of getting the diseases their parents had or are prone to. Getting your dog from a reputable dog breeder is one of the ways you can assure they would come out healthy.

On an average, a Rottweiler and German Shepherd mix dog can live from 10 to 13 years. They can even outlive these numbers if you take care of them and they remain healthy.

Here are the most common health issues you should watch out for when you have a Shepweiler pup:

They may also acquire allergies and hypothyroidism. It is best that you bring them to a vet regularly to check on them and to monitor their health. This way, any diseases will be diagnosed early and can be treated.

A Shepweiler dog’s grooming needs will depend on whose parent they followed more. But they are likely going to possess thick coats, and your German Shepherd Rottie mix will probably shed moderately.

If they acquired the medium-length shaggy coat from the German Shepherd, they’d require brushing at least three to four times each week. If they went after the Rottweiler, brushing once every week will suffice.

But regardless of their coat, brushing will need to be more frequent when it’s the shedding season.

Dog lovers usually buy Rottweiler German Shepherd mix puppies. This allows them to train the pup and to grow accustomed to their family as well. It’s also important to find a reputable dog breeder that can provide you with a certification that both parents are healthy.

As pups, it would be a lot harder to deal with them as they have extreme levels of energy and they may also be a little aggressive.

The price for a pup would be between $400 to $850 and even more. This could change depending on the dog breeder you asked for. Typically, more reputable dog breeders will ask for more.

Vaccinated and spayed/neutered pups will also have a higher price. Also, you have to spend at least a thousand dollars for the food and the medical needs every year.

You can also try looking at local dog shelters and find if they have Shepweiler dogs.

If you really want to get a Rottweiler German Shepherd mix pup, it is best that you have a larger lawn and you’re prepared for their needs, especially when it comes to exercising. However, you can guarantee that despite certain issues about them, they are brave and loyal to their families.