Why Are Some German Shepherds Black? 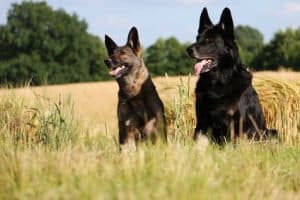 When you think German Shepherd, you probably think of the standard tan and black coat. But there is a variation where the entire coat is black, head to toe. Keep reading to find out what this is, what it means, and the real answer to the question of why are some German Shepherds black.

What causes a Black German Shepherd?

The black coat colour of a black German Shepherd is entirely genetic. It’s caused by a mutation in the genes of the dog and can be both recessive and dominant, which is strange because normally variations of this type are one or the other.

If the gene is dominant, for example breeding an all black parent, all of their pups will be solid black. If both parents have recessive black genes, then one or more dogs can be black.

It means that you could breed your dog, which is an entirely normal coloration, and because both your dog and the other parent hold recessive black coat genes, one or more of their pups could be solid black.

In general terms, black German Shepherds closely resemble other members of the breed. But, they tend to be slightly larger than average, and may also have a straighter back and posture than standard GS dogs. It is because Black German Shepherds aren’t bred as stringently for slouch back posture.

Their coat can range in length, as it does in all other German Shepherds, and can be floating, feathered or skirting. 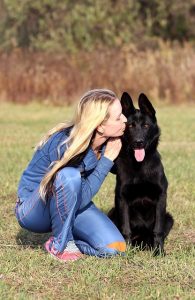 While the jet black appearance and confident countenance of a black Shepherd might cause people to shy away from them, in reality, they have the same sort of temperament as an ordinary dog of this breed.

Trained right, a black German Shepherd, will be just as excitable, loving and attentive with you as any other dog of this breed would be. 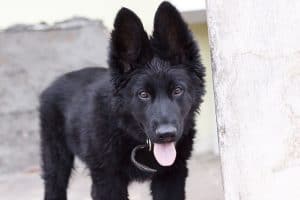 People who aren’t familiar with the breed might not know this, but yes, all German Shepherd puppies are born black, with the final coat coloration coming through at around the 6 to the 8-week mark.

It means that if you’re picking up your pup before this, there’s no way of knowing the final coat colour of your dog.

To add to this, because black coats can be caused by recessive genetics as well as dominant, you could pick up a pup from parents that are anything but black, and have them develop a pure black coat as they age.

What are black German Shepherds called?

You’ll find that black German Shepherds can have many different names, including all black, patent black, pitch black, pure black and solid black.

Whatever name you hear, it’s all referring to this one coat colour.

Does a black coat cause any other problems?

Apart from the standard health issues that affect German Shepherds, (hip and elbow dysplasia, heart and spine disease, eye diseases and digestive problems.) You’ll be happy to hear that being born with a handsome black coat will give your dog no other health concerns.

The answer to this is strange. While some kennel clubs might not like the all black colour and prefer the more standard coats, all black German Shepherds cost a lot more than normal pups.

While this might be due to the comparative rarity pushing the price up, I like to think it’s that everyone is following in the footsteps of Max Stephanitz, the original breeder of the first German Shepherds, in believing that all black GS dogs are an incredibly beautiful and attractive variation.

Why Are Some German Shepherds Black?

Whether you decide to go for an all black German Shepherd or not, now you know what causes it, what it means for the breed, and how it affects them. So if someone ever sees your dog and asks ‘Why are some German Shepherds black?’ Now you have the answer.

We hope that we’ve given enough information to everything you wanted to know, but if you have queries or some clarifications, feel free to leave us a comment below, and we’ll do what we can to get back to you.