Why Does My Dog Put His Paw On My Arm?

Does your dog paw you when you pet him? Or even when you’re just sitting on the couch minding your own business? Ever complained about how his nails are leaving scratch marks on your arms and ripping your favorite suits into pieces?

Have you stopped to ask yourself, “Why does my dog put his paw on my arm?” Read on to find out why.

If your dog has a habit of putting his paws on you, he’s probably trying to tell you something. Pawing is one of the ways by which dogs communicate. You may have noticed that puppies often paw each other or the ground in front of them to indicate that they want to play.

But when your dog paws at you, it’s not always because he’s in a playful mood. Yes, he may be doing it because he wants to play or because he is seeking affection. But he may also be trying to tell you that he’s hungry or that he’s scared. 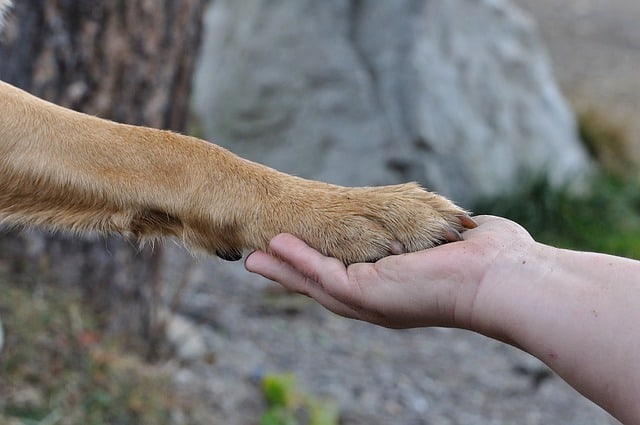 When your dog puts his paw on your arm, it may be because he needs your attention.

Some dog owners might even see pawing as a threatening action. There are those who suggest that when a dog puts his paw on your arm, he may be trying to assert his dominance over you. This is the old way of thinking, however, and is generally no longer considered to be true.

If you’re trying to figure out what your dog’s pawing means, you have to take some factors into consideration. For example, look at your dog’s expression: does he look mad or excited? Check his body language: does he seem tense or relaxed?

Dogs can often cause injuries with their pawing, but that doesn’t necessarily mean that they’re being aggressive. If you look at the overall picture, you’ll have a better idea of why your pooch is placing his paw on your arm. Below are some common reasons to help you out.

He wants to play

Sometimes, your dog places his paws on you just because he’s being friendly and is in a joyful mood. He may be trying to tell you that he wants to play.

This may even be a result of doggy training. It’s common for dog owners to teach their pets how to do a high five or a paw shake. Because of this, dogs associate the use of their paws with games, affection, and bonding with their human.

Your dog may be pawing you because he’s trying to tell you that his dish needs refiling. The next time your dog places his paw on your arm, check the time or check his dish. Maybe he’s just hungry.

If you find that your dog has associated pawing with mealtime, make sure that he’s not overdoing it. Maybe you haven’t noticed that you’ve been letting your pooch dictate when it’s time for him to eat. This could lead to him putting on too much weight, which is bad for any dog’s health.

He’s just trying to get your attention

Dogs are very social creatures and they rely on us, their human companions, for social interaction. If your dog has been pawing at you a lot, it may be because you haven’t been giving him enough attention.

The next time you find your dog pawing at you relentlessly, take a moment to consider what your day has been like. Have you been busy and haven’t had time for a walk or a short game of fetch? Do you think your pooch may be feeling neglected?

Dogs are like kids in this sense. If you don’t give them the attention they deserve, they’ll find a way to get you to notice them. Like a small child tugging on her mother’s skirt, your dog may be putting his paws on you because he wants you to pay attention.

Have you ever been upset and found your dog staying close to you and being unusually attentive? Dogs have an uncanny ability to read your emotions. And when their humans are sad or stressed, they’ll often try to comfort them.

One of the ways dogs do this is through touch. If you’re upset and your dog places his paw on you, he may simply be trying to establish a connection. After all, dogs are pack animals and are known to have the capacity to empathize.

Pawing can also be a sign that your dog is feeling anxious or scared. If his body language indicates stress — for example, his ears are flat — think about what may be causing him stress. 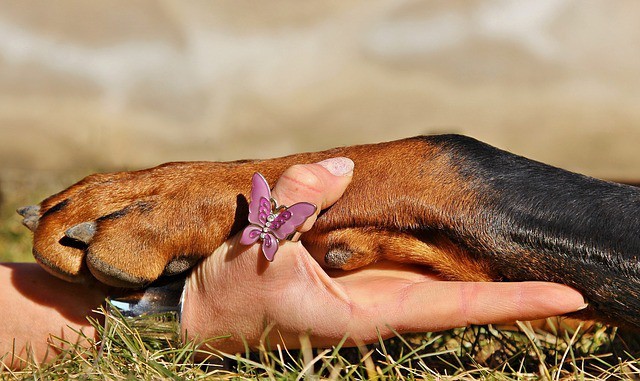 Pawing can be a dog’s way of indicating that he’s not feeling well.

Was he reprimanded? Were there loud noises or arguing in the house? Is he sick?

When this happens, you can either choose to comfort your dog or distract him by taking him outside for a walk or presenting him his favorite toy.

Now that you have several possible answers to the question “Why does my dog put his paw on my arm?”, you can better understand what your pooch is trying to communicate with you. Want to learn more about dog behavior and training? Check out our blog for more useful info.