Belgian Malinois vs German Shepherd – Which Is Better?

They look alike at first glance. They are employed in almost the same occupations. In fact, there are many perceived similarities between these two breeds leading people to mistake one for the other. Let’s look at the Belgian Malinois vs German Shepherd.

While it’s natural for people to think that the Malinois is an off-shoot of the German Shepherd, it actually descended differently from the more famous German Shepherd – with a fair bit of history behind it.

Let’s look at the similarities and then the differences between these two remarkable breeds. 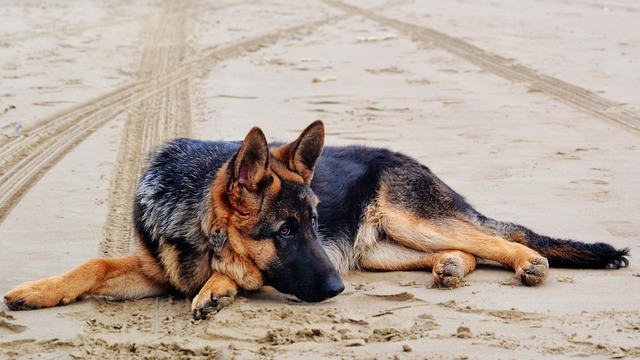 A German Shepherd dog lying down in the sand

The website Pet Gear Lab brings up the primary point with the German Shepherd vs Belgian Shepherd debate – their history.

As its name suggests, the Malinois developed as a herding dog in the country of Belgium, just south of Germany. While the German Shepherd is the more popular breed, the Belgian Malinois has existed at least a century longer.

Its history began in the 19th century when breeders in Belgium developed the Malinois to come up with a reliable herding dog for their sheep. As a result, the Malinois today has changed little from its early ancestors.

On the other hand, the German Shepherd as a breed came to prominence only in the early 20th century just before the outbreak of hostilities in Europe. Just like its Belgian cousin, the German Shepherd (which is also known as the Alsatian) resulted from the efforts of breeders in Germany to standardize farm and herding dog breeds in the 1800s.

The first recognized German Shepherd Dog appeared only in 1899, according to the German Shepherd Rescue Elite. The breed was registered with the Phylax Society by Max von Stephanitz with a dog named “Horand” as the first individual.

People who are not intimately acquainted with both breeds are understandably unable to spot the difference. However, there are specific differences in the appearance of both breeds that actually set them apart.

The Belgian Malinois has a shorter coat than the German Shepherd. While it does have a two-layered coat like the GSD, the outer layer is short and coarse. The coat usually comes in colors of fawn, red and brown.

On the other hand, the German Shepherd has a thicker and longer outer coat. Their outer coats, which are water resistant like the Belgian Malinois’ fur, are of medium length. There are many colors for their coats, including, black, tan and even white.

German Shepherds have angular faces with a short muzzle, while the heads of Belgian Malinois dogs are chisel-like in shape. They both have triangular ears. 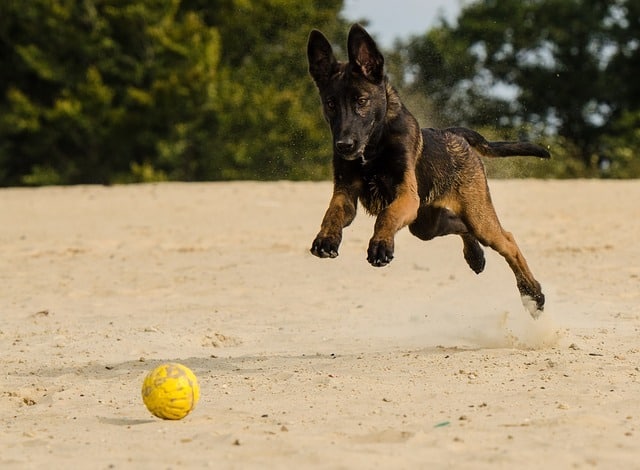 While both descending from farm and herd dogs — which have high energy levels as needed by their jobs — their temperament is another aspect in which the German Shepherd and Belgian Malinois have noticeable differences.

The German Shepherd is generally calmer and less energetic than the Belgian Malinois. They do well with intermittent exercises during the day, and then some naps to allow them to regain their lost energy.

On the other hand, the Belgian Malinois has higher energy and would require more play and exercise than its German cousin. Aspiring owners who have no history of handling high-energy dogs might as well avoid this breed unless they can invest time and money in tapping a trainer to put the dog to heel.

Both breeds are highly intelligent. The German Shepherd responds positively to training and is known to have excellent retention skills. When trained from a very young age, a German Shepherd dog is guaranteed to carry the learning acquired up to adulthood.

The Belgian Malinois is best described as curious and inquisitive. Even without training, an individual of this breed will strive to understand its surroundings. It is particularly attracted to moving objects.

You can imagine how hyperactive a Malinois puppy can be in the presence of people, motorized toys, vacuum cleaners, and automobiles. They can be quite a handful, but positive reinforcement in their training will be the key to success.

The Malinois is also known to be very sensitive, and any harsh treatment in the course of training is certain to be traumatic for the individual.

It’s because of their comparable intelligence that these two are the go-to breeds for K-9 work. Of course, well-trained individuals of both breeds have made names for themselves in the show rings for several decades now.

Suitable as a Family Pet?

The website is quite frank in pointing out that due to their high prey drive and energy levels, a Belgian Malinois puppy has the tendency to become really restless and run around the house.

If not properly trained, this breed can leave a wake of destruction behind them. Typical examples are torn couches, chewed up objects and, at the worst – wounded people.

The Belgian Malinois needs a lot of training from a qualified expert to be suitable for a home, but even then they still require lots of love and patience from their families.

While both are intelligent and trainable dogs, the German Shepherd is better suited to become a family pet because of several attributes – steadfast loyalty, intelligence and guarding instincts. You could also add in the fact the GSD has a more tolerable temperament than the Belgian Malinois.

In fact, the American Kennel Club has ranked the German Shepherd consistently as #2 in its list of popular dog breeds since 2013!

It may be quite difficult to decide which is more ideal as a pet, but in the Belgian Malinois vs German Shepherd discussion, the GSD is probably the better pick.